Pretzels With a Twist was born out of Renné’s first company – Nay’s Creative Ways.  Her vision is “We’ve put a New Twist on a Classic Snack”. In hosting teas, parties and events, Nay found that her Spicy Pretzels were a hit! She was asked several times in 2013 to sell them, and after much research, she and her husband Terry started Pretzels with a Twist in January, 2014.

They launched the company straight out of a commercial kitchen called Food Fort which is a division of the ECDI in Columbus, Ohio. Since then, her business has grown to seven flavors with shipments to 29 states.

Nay was born and raised in New Albany, Indiana and went to college in Pennsylvania and Rhode Island.  After serving several churches and ministries in Sandusky, Ohio, Indianapolis, Indiana and the Louisville, Kentucky area, she began working as a paralegal in estate work in New Albany.

She met her husband of 32 years, Terry, in 1984. He is in consulting and radio, and she has worked extensively with him. Most of the time, they have served at smaller, listener-supported stations. Nay began hosting meetings and parties for Terry at those stations which whetted her appetite for learning all about hospitality.

She believes hospitality is something that can be taught, and it is one of the best ways to get to know people…whether co-workers, friends, neighbors or even people you don’t know!

Currently, Nay and Terry attend Faith Life Church in New Albany, Ohio.  Growing Pretzels With a Twist to a retail company and doing speaking and comedy keep her busy as well as enjoying hosting tea parties and doing Pretzel Bar Events for any occasion. Although they have no children, Nay being from a family of 16 children keeps them well-supplied with lots of nieces and nephews and on to the great grands! 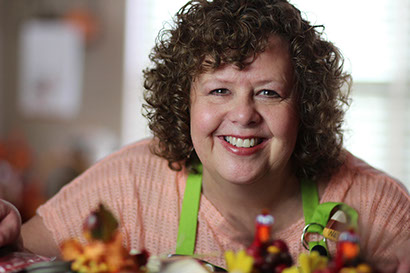